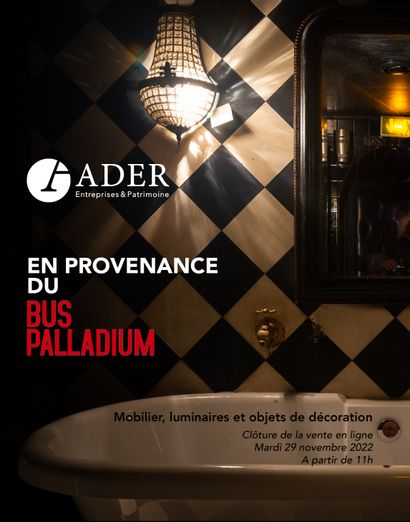 FROM THE PALLADIUM BUS : Furniture, lighting and decorative items

James Thibaut and James Arch created the Bus Palladium from a simple observation: in the 60's, for a young person from the suburbs, going out at night in Paris to dance was very difficult because of the almost non-existent transportation and the drastic selections at the entrance of the clubs.

The Jameses then set up a bus system, for only 2 francs, picking up the partygoers at various meeting points.

Long Chris, Johnny, Hervé Villard, the Jets, all friends of James, are the first artists to play at the Bus Palladium.

Salvador Dali would give his first letters of nobility to the establishment still in its raw state: the painter and about twenty of his friends arrived one evening at the Bus Palladium among the many beatniks who frequented the establishment. A large bottle of Vittel with several glasses, such is the artist's demand. Photographers and journalists report the event, Dali praises the Bus and the story begins.

Musicians follow one another in this mythical club: Johnny Halliday, Eddy Mitchell and the Chaussettes Noires, Julien Clerc make their first steps on stage, Mike Jagger celebrates his birthday there, Stone even meets Charden. The whole of Paris jostles to go to the Bus.

This Mecca of Parisian parties is also a place of inspiration: "It's at the Bus Palladium, that you can listen to...rue Fontaine...there's a crowd, for the little guys from Li-ver-pool..." sang Gainsbourg in 1966; "Un Palladium en Bus" sang Delpech in the 66 inventory More recently, the female singing duo Brigitte put the Bus back in the spotlight, titling one of the songs on their 2017 album "Palladium": "Come on, I'll take you to the Palladium, We'll drink rock'n'roll, On old gumbo hits..."

In October 2022, after so many years spent rocking Paris to the rhythm of rock, the Bus Palladium will temporarily close its doors to renovate its spaces. Furniture, lights, decorative elements are all souvenirs that the Bus' faithful will be happy to keep: offered at auction, these elements continue to bring to life the mythical past of the institution, while being part of a circular economy logic.

Delivery of lots by appointment:

The delivery of the lots will take place in the Gauriat warehouses, in Saint Denis : 31-33 boulevard Anatole France, 93200 Saint Denis

By appointment only: we will send you an email with all the necessary information as soon as your auction slip is paid.

Responsible for the sale :